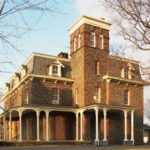 Leesburg, Va – The Margaret Paxton Memorial Trust (established in 1922 from the Estate of Rachel Paxton and simply known as the Paxton Trust) is charged with the care and keeping of the Estate to serve children in need in perpetuity. In 2022, the Paxton Trust will begin the long road to restoring the Estate’s crown jewel, the 149-year-old Carlheim Manor.

Carlheim Manor has been used by the Paxton Trust’s primary tenant, The Arc of Loudoun, for more than 10 years as the renowned, award-winning haunted house fundraiser, Shocktober. Unfortunately, years of wear and tear from the traffic generated by Shocktober, in addition to the natural decay of the home from it standing vacant for most of each year, have created concerns for public safety as well as the historic preservation of such an important Leesburg landmark.

The Trustees of the Paxton Trust have started work on a comprehensive plan for the entire Estate. The objectives of this plan include (i) a new State of the Art facility specifically designed for the Arc of Loudoun, and (ii) the renovation of Carlheim Manor. “Bringing the campus up to date, providing the Arc of Loudoun the infrastructure they need to grow their services for children in need here long-term, and making sure that Carlheim Manor can stand proud in the service of children for another 100 years is of the utmost importance to us and the community at large.” said Trustee, Paige Buscema.